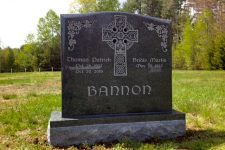 Many recognize the Celtic Cross on this monument as a symbol of Christianity. But do you recognize the other important symbols shown within? Combined, they tell an incredible story of faith.
At the center of the cross is the monogram for Jesus Christ, or “IHS Christogram.” From Greek, it is an abbreviation of the name IHΣΟΥΣ (Jesus). It is shown within a Circle which some say represents the halo of Jesus and others see simply as a Celtic holdover from pagan beginnings as the symbol of the sun.
Either side of the monogram displays the Alpha (A) and Omega (Ω) symbols. The two letters–Alpha being the first of the Greek Alphabet, and Omega being the last–symbolize God as beginning and end. Together they are a Christian symbol representing God’s eternal existence.
Above the monogram is the Chi-Rho Christogram, comprised of the first two letters of Christ’s name in Greek (ΧΡΙΣΤΟΣ, “Christos”), Chi (X) and Rho (P), superimposed upon each other. It is one of the earliest symbols of Christ and Christianity on record.
Shamrocks are poised beneath the monogram. St. Patrick used three-leafed clovers in the 5th century as an illustration of the holy trinity: the Father, Son, and Holy Spirit as one God. Shamrocks can also be symbolic of the three theological virtues of faith, love, and hope found in first Corinthians 13:13.
Beneath the Shamrocks is the Claddagh. In this Irish symbol dating back to the 16th century, the heart symbolizes love, the hands around it symbolize friendship, and the crown, everlasting loyalty.
At the base of the cross are Celtic Quaternaries, or four-cornered Celtic knots. The four may represent any number of elemental meanings, such as Fire, Earth, Air, Water; North, South, East, West; Spring, Summer, Autumn,Winter. Without a beginning or an end, these knots reference cyclical paths, and the connection between all that is natural and eternal.
Not only do symbols add a lovely design element to monuments, but they play an important role of conveying meaningful messages in a beautiful way, as this Celtic Cross demonstrates.
← Oliver Pond ProjectTrooper Thomas Clardy Honored on 2 year death Anniversary →